Stonor Park is a historic country house and private deer park situated in a valley in the Chiltern Hills at Stonor, about four miles (6.4 km) north of Henley-on-Thames in Oxfordshire, England, close to the county boundary with Buckinghamshire. The house has a 12th-century private chapel. The remains of a prehistoric stone circle are in the grounds. It is the ancestral home and seat of the Stonor family, Baron Camoys. The current Lord Camoys is Ralph Stonor.

The house nestles in the Chiltern Hills. Behind the main house, there is a walled garden in an Italianate style on a rising slope, providing good views. Around the house is a park with a herd of fallow deer. Around the park are Almshill Wood, Balham's Wood and Kildridge Wood. The house and garden are open to the public. 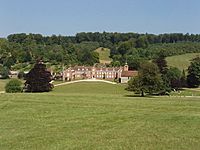 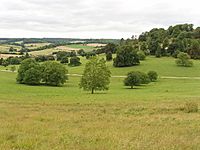 Stonor House has been the home of the Stonor family for more than eight centuries. In the house are displays of family portraits, tapestries, bronzes and ceramics. The house has a 12th-century private chapel built of flint and stone, with an early brick tower.

The house was probably begun after 1280, when Sir Richard Stonor (1250–1314) married his second wife, Margaret Harnhull.

During and after the English Reformation the Stonor family and many other local gentry were recusants. In 1581, the Jesuit priests Edmund Campion and Robert Parsons lived and worked at Stonor Park, and Campion's Decem Rationes was printed here on a secret press. On 4 August 1581, a raid on the house found the press. Campion and Parsons had left a few days earlier, but the elderly Lady Cecily Stonor, her son John, the Jesuit priest William Hartley, the printers and four servants were taken prisoner, and in 1585, Hartley was exiled. Despite further prosecutions and fines the Stonors remained Roman Catholic throughout the 17th and 18th centuries, and enabled many local villagers to remain Roman Catholic by allowing them to attend Mass at their private chapel. Between 1716 and 1756, John Talbot Stonor, Vicar Apostolic of the Midland District, used Stonor Park as his headquarters.

The Stonor family's steadfast adherence to Roman Catholicism throughout the reformation led to their marginalization and relative impoverishment in subsequent centuries. This has inadvertently resulted in the preservation of the house in a relative unspoiled and unimproved state.

The house was built on the site of a prehistoric stone circle or henge and this has given it its name. The remains of the circle are still visible with one stone incorporated into the south-east corner of the chapel. The stones are a mixture of sarsens and puddingstone. The current stone positions are the result of re-positioning during 17th-century landscaping and 20th-century reconstruction. The site is listed as a folly in the Sites and Monuments Record (SMR) (PRN 2064)) .

Stonor has been used as a location for a number of film and television productions, including The Pumaman (1980) and the James Bond film The Living Daylights (1987). In 1989, it was used as the home of millionaire Victor Hazell (played by Robbie Coltrane) in the film version of the Roald Dahl book Danny, the Champion of the World. In 2019, Stonor appeared in Episode 3, Series 6 of BBC's detective series Endeavour, entitled "Confection". The BBC/FX A Christmas Carol, made by the team behind Peaky Blinders and starring Guy Pearce and Andy Serkis, was partly filmed at Stonor in 2019. It also appeared as the venue of a two part episode of BBC One’s Antiques Roadshow in February 2021, filmed in 2020.

It is also used for high end car events, food festivals, antique fairs, art exhibitions, craft shows and outdoor concerts. It has been a venue for Gifford's Circus since 2017.

All content from Kiddle encyclopedia articles (including the article images and facts) can be freely used under Attribution-ShareAlike license, unless stated otherwise. Cite this article:
Stonor Park Facts for Kids. Kiddle Encyclopedia.