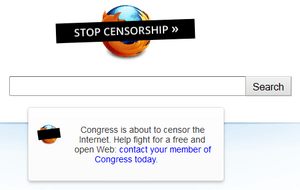 The Stop Online Piracy Act or SOPA is a proposed American law to stop copyright infringement on the Internet.

The Internet community had major discussion over it, but the bill was not passed. According to experts, the proposed changes to the internet would have worldwide effects.

There are critics who point out hidden risks and consequences which are unplanned. 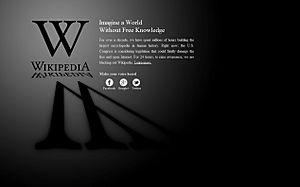 The English language Wikipedia page from 18 January 2012, illustrating its international blackout in opposition to SOPA and PIPA.

Some people and businesses support the new law. Others are alarmed by the law. The supporters worry that current copyright laws are not effective in shutting down piracy websites. The opponents worry that it is a kind of censorship. It is hard to tell which side is correct because the language in the law is still being written.

The English Wikipedia masked most of its pages with a banner on January 18, 2012. They did so after about 763 out of 100,000 editors voted to take this step. They used JavaScript to do this, which means that people could avoid the banner by just disabling JavaScript in their browser. The Wikipedia blackout is intended to spotlight the value of open access to information on the Internet.

Other websites joined protests against SOPA. For example, Google put up a black censor board in front of its logo.

All content from Kiddle encyclopedia articles (including the article images and facts) can be freely used under Attribution-ShareAlike license, unless stated otherwise. Cite this article:
Stop Online Piracy Act Facts for Kids. Kiddle Encyclopedia.