A story paper is a periodical publication similar to a literary magazine, but featuring illustrations and text stories, and aimed towards children and teenagers. Also known in Britain as "boys' weeklies", story papers were phenomenally popular before the outbreak of the Second World War.

Among the most well-known British story paper was Boy's Own Paper, which ran from 1879 to 1967.

The first known edition of what would later become known as a "story paper" was The Young Gentleman's Magazine, published in 1777. The first story paper to really take off was The Boys' and Girls' Penny Magazine, first published in September 1832.

In 1866, Charles Stephens began selling Boys of England on the English streets for a penny—the first "penny dreadful". Story papers in this style minimized the expense of writing in order to produce an extremely cheap product. Strictly speaking, the "penny dreadful" died off by the turn of the century, but this term was still used to refer to story papers throughout their history. The Halfpenny Marvel, first published in 1893, was "founded to counteract the pernicious influences of the Penny Dreadfuls", according to its title page. A book about these weeklies (also called "bloods" because of their savage contents) was created in 1948 by E. S. Turner, called Boys Will be Boys. 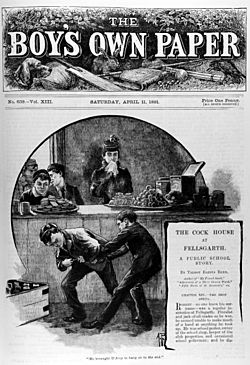 World War II caused chaos in Britain, and among other things the story papers had to be shut down as funds were redirected to the war. This is known as the Dark Ages for story papers, and nearly all of the papers ceased printing in 1939 or 1940.

In the 1950s and 1960s, some story papers such as the Rover briefly flourished, but television had a growing influence on the attentions of British children. Mergers between publishing houses finished off the remaining story papers, or modified them to become comic books, in the 1970s. Rover was the last survivor and ceased publishing in 1973.

George Orwell's essay, Boys' Weeklies, outlines the general themes of the story paper in the "Golden Age". As far as Orwell could tell, Britain was the only country in Europe in which story papers were produced. The Gem and The Magnet, the oldest of their kind, featured school serials always centred on a group of characters any reader could identify with. More recent story papers focused on adventure and intrigue, and had a large teenage readership.

According to Orwell, all of the English papers published at the time were stuck in the 1910s and had an underlying conservative slant, which taught children to be deferential to the upper-class. He suggested socialist values could be just as exciting if they followed the story paper format.

There were story papers for children of both sexes, although there was a broad overlap in the actual readership of the two.

All content from Kiddle encyclopedia articles (including the article images and facts) can be freely used under Attribution-ShareAlike license, unless stated otherwise. Cite this article:
Story paper Facts for Kids. Kiddle Encyclopedia.