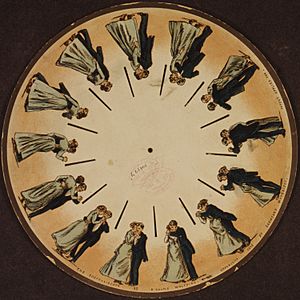 Looking through a slit a a mirror, the image will appear as shown

The Stroboscopic disc was the first tool that showed a moving picture. It is also known as phénakisticope, or phenakistiscope. Simon von Stampfer, and Joseph Antoine Ferdinand Plateau each invented it separately at the start of the 1830s. In 1833, first models were used to amuse people in London. The disc uses the optical illusion called beta movement or stroboscopic movement today. There is a rotating disc with images, and there are small slits between the images. A person watching will look at the reflection of the image in a mirror, from behind the disc. He or she will look through the slits, and see the images move, as shown in the picrture. Franz von Uchatius combined the stroboscopic disc and the laterna magica to get a device that was able to project images, in the 1850s.

All content from Kiddle encyclopedia articles (including the article images and facts) can be freely used under Attribution-ShareAlike license, unless stated otherwise. Cite this article:
Stroboscopic disc Facts for Kids. Kiddle Encyclopedia.