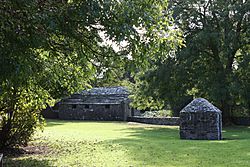 Struell Wells (Irish: Toibreacha an tSruthail; Ulster-Scots: Struell Waals) are a set of four holy wells in the townland of Struell, 1.5 miles (2.4 km) east of Downpatrick, County Down, Northern Ireland (grid ref: J513442). The wells date from before the time of Saint Patrick, and even today are used for people seeking cures. On Mid-Summer Eve (St John's Eve) and the Friday before Lammas, hundreds of pilgrims used to visit Struell. The earliest written reference to the wells is in 1306, but none of the surviving buildings is earlier than about 1600. Pilgrimages to the site are well documented from the 16th century to the 19th century. The site is managed by the Northern Ireland Environment Agency.

A fast flowing stream runs in a south-easterly direction, partly underground, through the secluded, rocky valley, along which is ranged five buildings. The stream (in Irish sruthar) (or sruthail) gives the site its name. Farthest north-west is the shell of a mid-18th century church, apparently never finished. This must have replaced an earlier church, as a chapel was listed here in the 1306 taxation roll. In 1957 some fragments of 13th century stone windows were found, and probably belonged to this chapel. They can now be seen built into the field wall next to the Drinking Well. Two of the four wells, set in a grassy hollow, are covered by small corbelled stone buildings, the others by larger stone structures. The Drinking Well, or Mother Well, is beehive-shaped and near the old church with a domed vault on wicker centring. The Eye Well is in the centre of the site, rectangular and with a pyramidal corbelled roof. To the south-east the stone roofed Men's Bathing Well (Men's Bath House) has a dressing room with seats leading to the bath room with its rectangular, sunken tank, which is reached by steps and filled with water supplied at floor level by a stone channel. There was a movable sluice to control the water flow out of the bath. A third room, at a lower level and with its own entrance, also with seats, served as dressing room to the adjoining Women's Bathing Well (Women's Bath House), now roofless. Here the water enters from a high level and the women must have had drenches rather than baths. The water leaves the bathhouse through a drain in the opposite wall. The smaller wells were used for bathing particular parts of the body, e.g. eyes, head, limbs etc., and a Foot Well is sometimes mentioned. In the larger wells the whole body was bathed. The bath houses now covering these wells are quite old, but were repaired by Lady Betty Cromwell in the 17th century.

The Wells and Saint Patrick

The site is traditionally associated with Saint Patrick, who is supposed to have come from nearby Saul to bathe in the waters. There is no historical evidence to support this connection. Saint Patrick is said to have blessed the wells. Legend has it that Saint Patrick used to spend a great part of the night standing in the water singing psalms and spiritual songs. These wells are almost certain to have been the fountain Slan mentioned in Saint Fiacc's hymn of Saint Patrick.

Pilgrims also came to the site to do penance. There is a stone Chair of Saint Patrick (or Bed of Saint Patrick), on the brow of the hill which, on the western side, overhangs the field with the wells. The "Bolster" stone has been disarranged. Around the stone chair is a roughly circular path over sharp stones called the Penitential Ring. There was a complicated penitential ritual involving circling all the wells and cairns, ending with the circling of the Penitential Ring on the knees seven times, sometimes carrying a large stone. The penitent was then seated on the Chair of Saint Patrick, in which he turned himself three times, being careful to turn from left to right. This was followed by prayers at the altar on the south sidewall of the ancient chapel and concluded with bathing in the wells.

Struell Wells has been a centre of pilgrimage since medieval times and a Papal Nuncio writing in 1517 may have visited the site. In 1643, Father Edmund McCana noted that the stream had been brought into existence by the prayers of Saint Patrick. Walter Harris in 1744 gave an account of the pilgrimage activity at the wells. The pilgrimages continued into the 19th century, but rowdy disturbances led to the ecclesiastical authorities prohibiting devotional exercises and the site became less visited.

In 2006, Environment and Heritage Service officials were asked to explain why the wells were drying up and why two of the wells on the site no longer contained water. They said they were aware of the water flow problems and had remedial measures in place which would involve the excavation of some of the piping.

All content from Kiddle encyclopedia articles (including the article images and facts) can be freely used under Attribution-ShareAlike license, unless stated otherwise. Cite this article:
Struell Wells Facts for Kids. Kiddle Encyclopedia.