The Sturgeon House is a saltbox house dating from around 1838 in Fairview, Erie County, in the U.S. state of Pennsylvania. It was listed on the National Register of Historic Places in 1980. The Sturgeon House is operated as museum by the Fairview Area Historical Society.

The Sturgeon House is located at the intersection of Water Street and Avonia Road (Pennsylvania Route 98). The house is a rare example of a saltbox house in northwestern Pennsylvania, as well as a house with a recessed side porch. The house is constructed of "stone foundation walls and topped with heavy timber sills which are notched to receive log form beams." The roof of the house is slanted at an angle of 30 degrees. The front door is framed by a cornice and Federal-style entablature and pilaster. 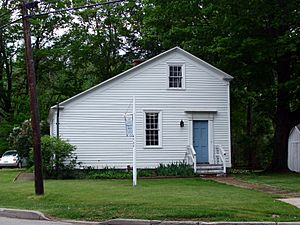 Front of the house showing the distinctive saltbox shape.

Jeremiah and William Sturgeon were the earliest settlers of what is now Fairview Township, who acquired land from the Pennsylvania Population Company in 1797. The Sturgeons operated "coach stops and taverns" in the area for travelers after the first road was cut from Erie to Cleveland, Ohio in 1805. They founded the community of Sturgeonville, which eventually became Fairview. The house was built around 1838 by Samuel C. Sturgeon and is one of several built by the Sturgeons. The southern addition of the house was possibly constructed in the early 1850s. The Sturgeon House was sold to the Fairview Area Historical Society in 1979 by a descendant of the Jeremiah Sturgeon. The house was listed on the National Register of Historic Places on December 10, 1980.

All content from Kiddle encyclopedia articles (including the article images and facts) can be freely used under Attribution-ShareAlike license, unless stated otherwise. Cite this article:
Sturgeon House Facts for Kids. Kiddle Encyclopedia.