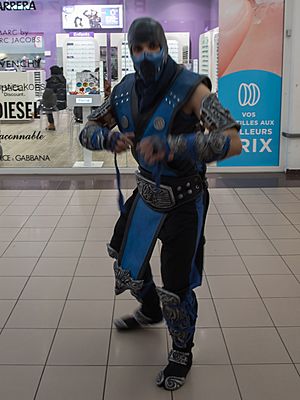 A cosplayer dressed up as Sub-Zero.

Sub-Zero is a fictional character in the Mortal Kombat games for video game consoles. He has appeared as a guest fighter in Injustice 2 alongside Raiden, Hellboy and the Teenage Mutant Ninja Turtles.

He was portrayed in games by Steve Blum and Jim Lee.

All content from Kiddle encyclopedia articles (including the article images and facts) can be freely used under Attribution-ShareAlike license, unless stated otherwise. Cite this article:
Sub-Zero (Mortal Kombat) Facts for Kids. Kiddle Encyclopedia.