Sueno's Stone is a Picto-Scottish Class III standing stone on the north-easterly edge of Forres in Moray and is the largest surviving Pictish style cross-slab stone of its type in Scotland, standing 6.5 metres (21 feet) in height. It is situated on a raised bank on a now isolated section of the former road to Findhorn. The stone is named after Sweyn Forkbeard, but this association has been challenged and it has also been associated with the killing of King Dubh mac Ailpin in Forres in 966. The stone was erected c. 850–950 but by whom and for what, is unknown.

Evidence from Timothy Pont's Mapp of Murray (c. 1590), the more modern military maps of Roy and Ainslie (1750 and 1789 respectively) and Robert Campbell's map of 1790 all show Sueno's Stone along with another stone that has now disappeared. The fact that Pont's map shows the standing stones at all indicates their size as Pont does not show any other obelisks anywhere. Ainslie has inscribed on his map "two curiously carved pillars". The fact that these maps show the pillar(s) in their present (at least approximate) position belies the notion that it was found elsewhere and re-erected at its present location. Hector Boece (c. 1465–1536) (not known entirely for his historical accuracy) mentions the stone and attributes it to Sueno. Lady Ann Campbell, the Countess of Moray, is noted in the early 1700s as carrying out maintenance on the stone in an attempt to stabilise it. This was achieved by constructing stepped plinths around the base and these are what can be seen today. Archaeological excavations carried out in 1990 and 1991 suggest that it may originally have been one of two monumental stones. 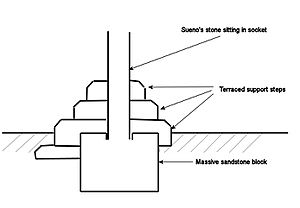 Details of base of stone

Sueno's Stone is an upright cross-slab with typical Pictish style interwoven knotwork on the edge panels. It is carved from local yellow sandstone which is prevalent in Moray but has suffered considerable weathering in places. The west face has a carved Celtic cross with elaborately interlaced decoration and a poorly preserved figural scene (perhaps a royal inauguration) set in a panel below the cross. The east face has four panels that show a large battle scene. The top panel is quite weathered and shows rows of horsemen. The second panel depicts armed foot soldiers and the third panel shows the decapitated vanquished soldiers, the heads piled up, and soldiers, archers and horsemen surrounding what may be a broch. The base panel depicts the victorious army leaving the battlefield. The sides are also elaborately carved. In the early 1990s, the stone was encased in armoured glass to prevent further erosion.

Local legend says this was the crossroads where Macbeth originally met the three witches. In the legend, they were eventually imprisoned inside the stone and should the stone be broken they would be released. However, this tale can date no further back than Shakespeare's play.

Another legend suggests that the stone was erected for King Dubh mac Ailpin. The Annals of Ulster reported "Dub mac Maíl Coluim (mac Ailpin), king of Alba, was killed by the Scots themselves"; the usual way of reporting a death in internal strife, and place the death in 966. It has been suggested that Sueno's Stone, near Forres, may be a monument to Dub, erected by his brother Kenneth II (Cináed mac Maíl Coluim). It is presumed that Dub was killed or driven out by Cuilén, who became king after Dub's death, or by his supporters.

All content from Kiddle encyclopedia articles (including the article images and facts) can be freely used under Attribution-ShareAlike license, unless stated otherwise. Cite this article:
Sueno's Stone Facts for Kids. Kiddle Encyclopedia.