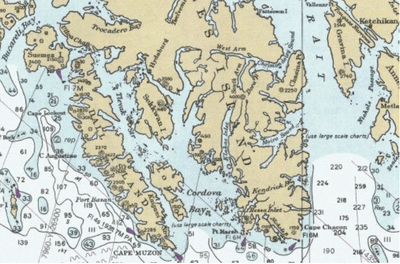 Sukkwan Island lies near the head of Cordova Bay, north of Long Island and east of Dall Island. US Coast Survey chart detail

Sukkwan Island is an island in the Alexander Archipelago of southeastern Alaska, United States. It lies just off the southwest coast of Prince of Wales Island. To its west lies Dall Island, and to its south lies Long Island. The nearest city is Hydaburg, to its north on Prince of Wales Island, just across the Sukkwan Strait. The island's area is 166.9 km² (64.44 sq mi) and a population of nine persons was reported at the 2000 census.

Sukkwan Island is where the eponymous novella by David Vann takes place.

All content from Kiddle encyclopedia articles (including the article images and facts) can be freely used under Attribution-ShareAlike license, unless stated otherwise. Cite this article:
Sukkwan Island Facts for Kids. Kiddle Encyclopedia.