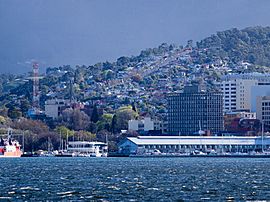 Sullivans Cove is on the River Derwent adjacent to the Hobart CBD in Tasmania.

It was the site of initial European settlement in the area, and the location of the earlier components of the Port of Hobart.

The Cove was the initial landing site of what is now the city of Hobart. It was founded on 21 February 1804 by Lieutenant Governor David Collins, who travelled to the shore via what was then a rocky island named Hunter Island. The connection to the shore was developed and is now known as Hunter Street. The island now has a building directly above it.

Although the first European settlement in the state was further up the river at Risdon Cove by John Bowen a year earlier, that settlement was abandoned and relocated to join the Sullivans Cove settlers.

Collins named Sullivans Cove after John Sullivan, Permanent Under Secretary to the Colonies. 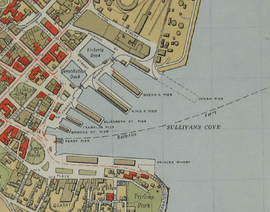 By 1916, several piers had been constructed: from north to south:

In 1947 there was a proposal to replace Queens and Kings Pier with an extra wide pier, but this was never realised.

Kings Pier was demolished and replaced with a marina for commercial and private craft, around 1970. This marina increased in size in 2003.

Sullivans Cove holds large historical and sentimental value for the city. The cove area itself is now known as Macquarie Wharf and serves as the main port for the city. Many of the original buildings along the esplanade are still standing.

The University of Tasmania's School of the Arts building is based on Hunter Street.

A serviced apartment building, ZeroDavey, has drawn criticism for its Davey Street facade, being condemned by the local community as aesthetically unpleasing consisting of a grey concrete prefabricated wall with jarring blue metal ledges, as opposed to the rest of the building having a sandstone facade to blend with the heritage Hunter Street buildings next door.

During 2004 there has also been discussions about a proposal for a tourist tram from Sullivans Cove to the CBD, and possibly to North Hobart.

An international design competition was held for the Hobart waterfront in 2006. It attracted 280 entries from over 50 countries. Three winners were announced on January 26, 2007.

With the change in the cove's primary activity from a freight port to tourism and recreational uses, many of the sheds in the area have been either re-purposed or replaced – notably, all buildings keep the former gabled roof architecture. These buildings include:

All content from Kiddle encyclopedia articles (including the article images and facts) can be freely used under Attribution-ShareAlike license, unless stated otherwise. Cite this article:
Sullivans Cove Facts for Kids. Kiddle Encyclopedia.