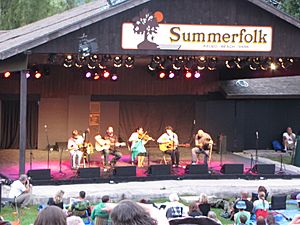 Folk band The Dardanelles performing on the main stage in 2010

Summerfolk is an annual folk music and craft festival held in Owen Sound, Ontario during the third weekend in August (August 20–23 in 2015). Summerfolk attracts performers and fans from across North America and the globe to Kelso Beach Park located on the west shore of Owen Sound on Georgian Bay. The festival was founded in 1976 by brothers Tim and John Harrison and is nationally renowned for its music and craft excellence. It was also a founding member of the Ontario Council of Folk Festivals now known as Folk Music Ontario.

Folk is not an exclusive term and Summerfolk welcomes all music lovers. Over the years, audiences have met musicians from every continent. With music from Mongolia to Mozambique, Chile to China, and Georgian Bay to the Georgia Strait, Summerfolk stages are just as likely to feature traditional songs from around the world as contemporary songs from around the block – sometimes in the same workshop. The festival that began with an audience sitting on garbage bags in a muddy field in 1976 has grown to a four-day festival with seven musical stages and an Artisan’s Village where dozens of vendors sell handcrafted wears. Now, the festival hosts thousands of attendees and hundreds of volunteers annually. The muddy park at Kelso Beach developed alongside Summerfolk. Thanks to partnerships between the City of Owen Sound and the Georgian Bay Folk Society, Kelso Beach now welcomes crowds to a limestone amphitheater with seats for 3000 people and a covered stage dedicated to the memory of Stan Rogers; one of Summerfolk’s original performers and great supporters. After 40 years, the grounds look different but the spirit is the same. The 2010 edition of the festival saw 12,000 people attend over the three days.

Summerfolk experienced heavy rain during 20 of its first 30 years. Long-time festival goers sometimes refer to it affectionately as 'Summersoak". In August 2011 the festival experienced extremely inclement weather with heavy downpours and thundershowers. Attendance plummeted and The Folk Society found themselves $25,000 in debt when the festival was over. An appeal to the community and many of its far flung supporters was able to turn this situation around by October of that year and Summerfolk 2012 ran as usual. On years when lightning forces the sound crews to shut down the PA systems and wait for the thunder to subside, performers have been known to move into the centres of tents and stages, inviting the audience in out of the rain for intimate acoustic performances and sing-a-longs. At one particularly memorable workshop in 2011, Ken Whitely, Kildear, and the Good Lovelies invited the audience to come in under the cover of the Gazebo Stage while rain pelted their backs and umbrellas. The workshop ended with Ken Whitely leading the crowd in swelling harmonies on “This Little Light of Mine”, fitting for a festival that just keeps shining.

Since 2007, Summerfolk has reserved performance spaces for young performers through the Young Discoveries Showcase offering winners a chance to play at the festival. The contest is open to performers under the age of 21 and features two rounds of judged performances. The 2015 preliminaryes will take place at Back Eddie's in Paisley March 8, the Owen Sound Library March 15th, and finalists will perform on March 29 at the Harmony Centre in Owen Sound.

Many performers who have played at Summerfolk have gone on to great commercial success, such as Leahy, Valdy, The Rankins, The Arrogant Worms, and Natalie MacMaster. Other more commercial Canadian talent have also graced the stages over the years such as Gowan, Rik Emmett, Blue Rodeo, Moxy Früvous, and Bruce Cockburn. One of Summerfolk's most famous and revered performers was Stan Rogers.

All content from Kiddle encyclopedia articles (including the article images and facts) can be freely used under Attribution-ShareAlike license, unless stated otherwise. Cite this article:
Summerfolk Music and Crafts Festival Facts for Kids. Kiddle Encyclopedia.