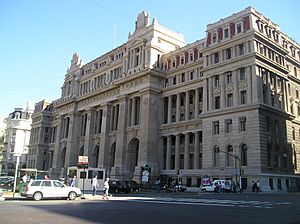 The Palace of Justice, site of the Supreme Court. 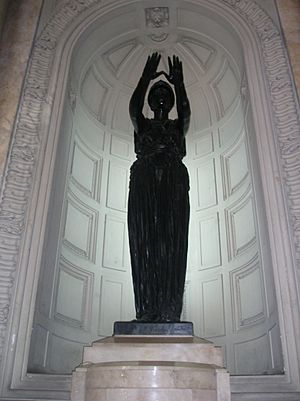 The Supreme Court of Argentina (Spanish: Corte Suprema de Justicia de la Nación literally Supreme Court of Justice of the Nation) is the highest court of law of the Argentine Republic. It was inaugurated on 15 January 1863. However, during much of the 20th century, the Court and the Argentine judicial system in general, has lacked autonomy from the executive power. The Court has recently been reformed (in 2003) by the decree 222/03.

The Supreme Court functions as a last resort tribunal. Its rulings cannot be appealed. It also decides on cases dealing with the interpretation of the constitution (for example, it can overturn a law passed by Congress if it deems it unconstitutional).

The members of the Supreme Court are appointed by the President with the agreement of at least two thirds of the present Senate members in a session convened for that purpose, and can only be removed by an impeachment process called juicio político ("political trial"), initiated by the Chamber of Deputies and carried out by the Senate, exclusively on grounds of improper behaviour.

All content from Kiddle encyclopedia articles (including the article images and facts) can be freely used under Attribution-ShareAlike license, unless stated otherwise. Cite this article:
Supreme Court of Argentina Facts for Kids. Kiddle Encyclopedia.