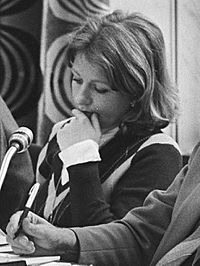 Suzanne Dekker (born 31 October 1949) is a former Dutch politician. She was born in Amsterdam. She is a member of Democrats 66 (D66). She sat as a member of the European Parliament (MEP) from the Netherlands between 1979 and 1981. Dekker also served in the Dutch House of Representatives from 1981 to 1982.

All content from Kiddle encyclopedia articles (including the article images and facts) can be freely used under Attribution-ShareAlike license, unless stated otherwise. Cite this article:
Suzanne Dekker Facts for Kids. Kiddle Encyclopedia.