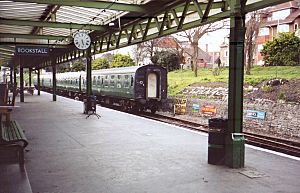 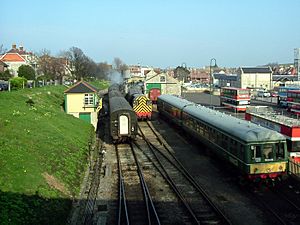 The Swanage Railway is a six-mile (10 km) long heritage railway in the Purbeck district of Dorset, England. The railway follows the route of the Purbeck branch line between Norden railway station, Corfe Castle railway station, Harman's Cross railway station, Herston Halt railway station and Swanage. The line was re−connected to the mainline at Wareham, Dorset along a stretch of the branch line. This had previously only remained open to freight traffic until 2005. Trains operate on the Swanage Railway between Swanage and Norden Park & Ride every weekend and Bank Holiday from mid-February to the end of the year. From April to October, they operate all seven days in the week; with Santa Special services in December. The link between the Swanage Railway and the main line at Wareham has been used used for materials deliveries, special excursions. The line has now reopened to its first through traffic from London with occasional special services.

All content from Kiddle encyclopedia articles (including the article images and facts) can be freely used under Attribution-ShareAlike license, unless stated otherwise. Cite this article:
Swanage Railway Facts for Kids. Kiddle Encyclopedia.