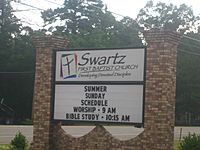 Swartz is a census-designated place (CDP) in Ouachita Parish in northeastern Louisiana, United States. The population was 4,536 in the 2010 census, an increase of 289 or 6.8 percent over the 2000 population. It is part of the Monroe Metropolitan Statistical Area.

According to the United States Census Bureau, the CDP has a total area of 13.5 square miles (35 km2), all of it land.

Swartz is the residence of Vance McAllister, the former Republican U.S. Representative from Louisiana's 5th congressional district and a Monroe-area businessman.

All content from Kiddle encyclopedia articles (including the article images and facts) can be freely used under Attribution-ShareAlike license, unless stated otherwise. Cite this article:
Swartz, Louisiana Facts for Kids. Kiddle Encyclopedia.