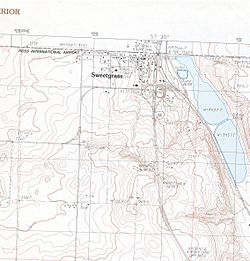 Sweet Grass (also Sweetgrass) is a census-designated place and unincorporated community in Toole County, Montana, United States, on the Canada–US border. It is the northern terminus of Interstate 15, an important route connecting western Canada, the western United States, and Mexico.

In 2004, a joint border facility opened at the Sweetgrass port of entry and Coutts, Alberta, housing both Canadian and American federal authorities. At 3,540 feet (1,080 m) in elevation, it is one of the higher border crossings.

Fire service is provided through the volunteer fire department in Coutts.

All content from Kiddle encyclopedia articles (including the article images and facts) can be freely used under Attribution-ShareAlike license, unless stated otherwise. Cite this article:
Sweet Grass, Montana Facts for Kids. Kiddle Encyclopedia.