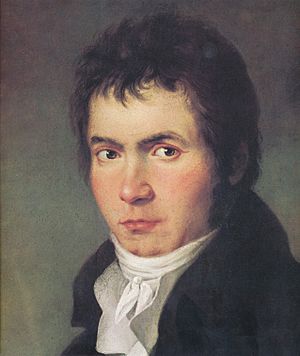 The Symphony No. 3 in E flat major ("Eroica"), Op. 55 is a work for orchestra. It was written in 1803 by Ludwig van Beethoven. It was completed in 1804, and premiered on 7 April 1805 at the Theater an der Wien. Beethoven did not want the symphony to be about Napoleon, but he did want to dedicate it to him. When Beethoven learned Napoleon had declared himself Emperor, he tore the dedication page in pieces. The symphony was published in 1806 with the subtitle "Eroica" (Heroic). The symphony has four movements (parts).

The first movement has a tempo of Allegro, which is moderately fast. It is in Unable to parse music symbol time time, and it uses sonata form. It starts with two loud E-flat major chords. Then, the first main melody of the movement is played by the cellos. After a few minutes, the second main melody is played in B-flat major.

All content from Kiddle encyclopedia articles (including the article images and facts) can be freely used under Attribution-ShareAlike license, unless stated otherwise. Cite this article:
Symphony No. 3 "Eroica" (Beethoven) Facts for Kids. Kiddle Encyclopedia.