Synemon plana, commonly known as the golden sun moth, is a diurnal moth native to Australia.

It is a medium-sized moth with clubbed antennae. The clubbed antennae are a notable feature of Synemon plana; most other moths have brushy antennae. The golden sun moth appears on the list of Australian critically endangered fauna. The golden sun moth is synonymous with Austrodanthonia species of grasses and is almost confined to grasslands which are home to these grass species. At least a 40% cover of Austrodanthonia species is optimal for the species. 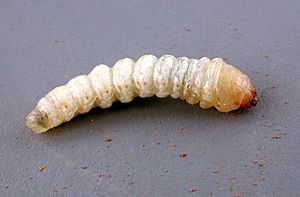 The life cycle of the golden sun moth is relatively well understood. Longevity is estimated to be about two years (Edwards 1994), however, genetic evidence suggests that generation time may actually be 12 months (Clarke 1999). After mating, it is believed that the females lay up to 200 eggs at the base of the Austrodanthonia tussocks. The eggs hatch after 21 days. The larvae tunnel underground where they remain feeding on grass roots before digging a vertical tunnel to the surface where the pupa remains for six weeks until the adult moths emerge. The immature stages of the golden sun moth have not yet been described. Possible variation in the length of the larval stage of the golden sun moth may create the flexibility needed for a population to survive harsh years (Edwards 1993). When females emerge from the tunnel as adults, they already possess fully developed eggs (Edwards 1993), and begin to search for a mate, flashing the vivid orange hindwings to attract any males flying overhead (Clarke & Spier 2003).

Adults only live for two to five days, as they cannot feed (Edwards 1993).

In January 2021, a moth was sighted and photographed by a man walking his dog in Wangaratta, Victoria.

All content from Kiddle encyclopedia articles (including the article images and facts) can be freely used under Attribution-ShareAlike license, unless stated otherwise. Cite this article:
Synemon plana Facts for Kids. Kiddle Encyclopedia.