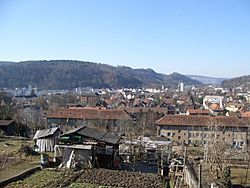 Töss is a district in the city of Winterthur in Switzerland. It is District number 4.

Until 1922 it was a municipality on its own. Then it became part of Winterthur.

It is named after the river Töss which flows through the district.

All content from Kiddle encyclopedia articles (including the article images and facts) can be freely used under Attribution-ShareAlike license, unless stated otherwise. Cite this article:
Töss (Winterthur) Facts for Kids. Kiddle Encyclopedia.