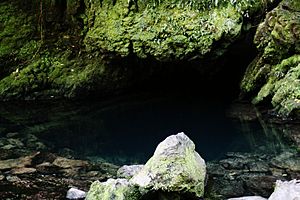 The mouth of The Resurgence, the spring that drains much of the hill through limestone caves and sinkholes

Tākaka Hill is a range of hills in the northwest of the South Island of New Zealand. Made of marble that has weathered into many strange forms and with numerous sink holes, it is typical karst country. The marble is Ordovician in age and from the Takaka Terrane.

There is only one road winding over and around the flanks of Tākaka Hill, State Highway 60, following the valleys of the Tākaka River to the northwest and the Riuwaka River to the southeast. In July 2020, the name of the pass was officially gazetted as Tākaka Hill Saddle by the New Zealand Geographic Board.

It rises to 791 metres at its highest point and separates the coastal communities of Golden Bay from those of the more populous Tasman Bay / Te Tai-o-Aorere to the southeast and because of its winding nature isolates Golden Bay from the rest of the South Island.

Tākaka Hill is notable for its (now defunct) marble quarry and for many limestone caves and sinkholes, including Ngarua Caves which are open to the public and feature deposits of moa bones. Harwood's Hole, at one time the deepest cave in New Zealand, is also to be found on Tākaka Hill.

Many of the caves drain into The Resurgence, a spring at the foot of the hill.

Tākaka Hill, as many other areas in and around the Golden Bay, has also been the location for many scenes filmed for The Lord of the Rings film trilogy.

All content from Kiddle encyclopedia articles (including the article images and facts) can be freely used under Attribution-ShareAlike license, unless stated otherwise. Cite this article:
Tākaka Hill Facts for Kids. Kiddle Encyclopedia.