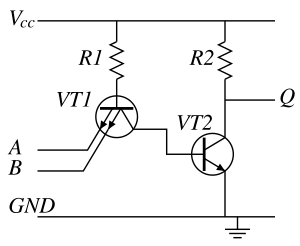 Transistor–Transistor Logic (TTL) is a class of digital circuits built from transistors and resistors. It is called transistor–transistor logic because the logic function (e.g., AND) and amplification is performed by transistors. Many integrated circuits have TTL technology. They are used in applications such as computers, industrial controls, test equipment and instrumentation, synthesizers, etc.

All content from Kiddle encyclopedia articles (including the article images and facts) can be freely used under Attribution-ShareAlike license, unless stated otherwise. Cite this article:
Transistor–transistor logic Facts for Kids. Kiddle Encyclopedia.