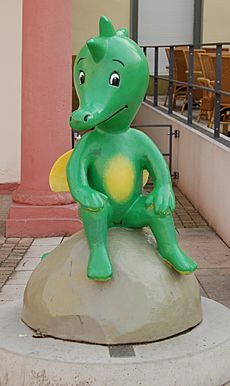 Statue of Tabaluga in Erfurt

Tabaluga (1997-2004) is an animated television series produced by Flying Bark Productions (previously known as "Yoram Gross Films Studio" and "Yoram Gross-EM.TV"), based on the character of the same name created by Peter Maffay. In this series, Tabaluga is the last of the dragons and the crown-prince of Greenland, a magical place inhabited by talking animals of many different species. Tabaluga must defend his home from two rival kingdoms on either side of Greenland; a frigid arctic tundra, ruled by the evil snowman Arktos and a searing desert, ruled by an evil sand-spirit named Humsin. It was shown on Seven Network (From 1996 till 2003) in Australia and ZDF in Germany.

The series focusses on Tabaluga, the last dragon living in Greenland, a land occupied by intelligent, talking animals. As a dragon he is tasked with defending Greenland against the evil snowman Arktos and the desert spirit Humsin.

Following the conclusion of the third season in 2004, a Christmas cartoon film, "Tabaluga und Leo" (engl. "Tabaluga and Leo"), based on the TV cartoon series aired in 2005, serving a sequel to the animated series.

It is a celebration of Greenland Day for Greenland and Christmas Eve for humans. An orphaned boy named Leo who is having no luck getting a foster family decides to run away and enters a portal into Iceworld. During a search for some mountain roses to complete the Greenland festival, Tabaluga rescues Leo from Arktos and takes him to join the festival. Arktos and James intensify Leo's clumsiness in order to swipe his toy to develop a new automated weapon. The damage Leo caused to a green crystal forces Tabaluga to go on an urgent quest for a new one, Leo by his side. When Tabaluga procures the new green crystal, Arktos kidnaps Leo to complete the essential part of his new weapon. Tabaluga slips into Ice Town, rescues Leo and returns in time to save the Greenland festival. Arktos launches his new automated weapon on Greenland, but Tabaluga and Leo repel it. Finally Tabaluga persuades Leo to go back to his world and join his new foster parents.

All content from Kiddle encyclopedia articles (including the article images and facts) can be freely used under Attribution-ShareAlike license, unless stated otherwise. Cite this article:
Tabaluga (TV series) Facts for Kids. Kiddle Encyclopedia.