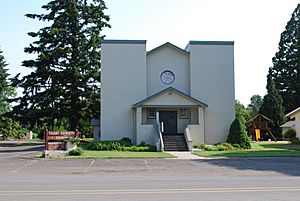 Talbot is an unincorporated community in Marion County, Oregon, United States. It was named after Guy W. Talbot, the first vice-president and general manager of the Oregon Electric Railway Company. The station was first known as Roby, after a pioneer family in the vicinity but the name was changed to Talbot when it became confused with "Ruby" in Multnomah County.

All content from Kiddle encyclopedia articles (including the article images and facts) can be freely used under Attribution-ShareAlike license, unless stated otherwise. Cite this article:
Talbot, Oregon Facts for Kids. Kiddle Encyclopedia.