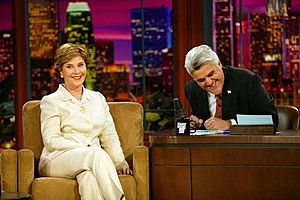 A talk show is a radio or television program where one or more hosts discuss current issues or other topics with guests. Many talk shows (especially those on radio) allow members of the public to join in, through telephone calls, letters, e-mail and Internet chat. Talk shows are often meant to entertain, and many feature comedy or entertainers performing. Many shows, though, do a public service, by informing the public and discussing issues openly. While some are locally based, and serve only one station's audience, others become syndicated and play on many stations, or are broadcast by a regional or national network.

The host of a talk show may already be a celebrity, or may become one as their show becomes popular. Some are professionals or experts in a field of knowledge, such as psychology or business. Others are well-known performers who can converse well with others. Guests on a talk show may also be experts in a field of knowledge or work, longtime professionals, or new and familiar celebrities, performers or athletes. Sometimes guests are members of the public who do something that interests others, such as inventors and authors, or someone who comes to public attention through a disaster or mishap.

Many celebrities host a talk show after they finish work on a television series, to change the direction of their career or to promote things they think are important. Many such series last only a season or two, and some even less. Actresses Gabrielle Carteris, Caroline Rhea and Megan Mullally each hosted short-lived talk shows, after leaving successful series. Nearly every show aired at the same time as The Tonight Show has been cancelled after a short run, including shows hosted by Chevy Chase and Dennis Miller. Arsenio Hall came close, with a show lasting five seasons. Late Show with David Letterman has been the most successful, and is still airing. (Ironically, David Letterman was a hopeful to take over The Tonight Show from Carson when he retired in 1992.)

Talk shows became more and more popular on AM radio from the 1970s onward, as AM stations began to play less music. Today talk shows are heard on AM, FM, and also shortwave radio stations, satellite radio, and the Internet. Larry King began his career on radio, and "crossed over" to television after many years as a popular host. Howard Stern led the trend of "shock jocks", using profanity and personal topics to make his show more exciting. Art Bell talked about controversial topics, like UFOs and possible government conspiracies.

Call-in shows are meant especially for members of the public to join in, by telephone. Callers may wish to talk about current topics in politics, economics or social trends, or to seek advice, or help with a personal problem. Dr. Laura Schlesinger, Dr. Joy Browne, and Bruce Williams help callers with problems, while Michael Savage and many other hosts discuss current issues, on their radio shows.

All content from Kiddle encyclopedia articles (including the article images and facts) can be freely used under Attribution-ShareAlike license, unless stated otherwise. Cite this article:
Talk show Facts for Kids. Kiddle Encyclopedia.