Kids Encyclopedia Facts
This page is about the urban neighborhood. For the unincorporated place, see Talmage, California. 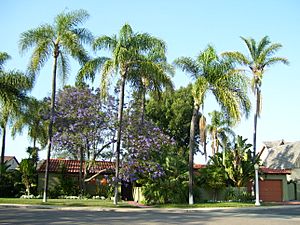 Talmadge is a neighborhood of the mid-city region of San Diego, California. Its borders are defined by Fairmount Avenue to the West, Montezuma Road/Collwood Boulevard to the Northeast, and El Cajon Boulevard to the South.

The architecture in Talmadge is eclectic, with styles including Spanish Revival, California bungalows, Cape Cod cottages and Normandy Style homes. Cliff May, a renowned Southern California architect, designed several homes in Talmadge. Kensington and Talmadge are sometimes grouped together as one community for official purposes, and they are part of the same community planning area.

All content from Kiddle encyclopedia articles (including the article images and facts) can be freely used under Attribution-ShareAlike license, unless stated otherwise. Cite this article:
Talmadge, San Diego Facts for Kids. Kiddle Encyclopedia.