Goods traffic was reported to have started by November 1902. A station master was appointed in 1911. In 1920 he was working over 12 hours a day.

The name was changed from Taringamutu to Taringamotu after Alexander Young had described it as an error in Parliament in 1913.

Timber was the main traffic, transferring from the Taringamotu Tramway, but the station also handled other goods, such as 122 tons of fertilisers in 1926. 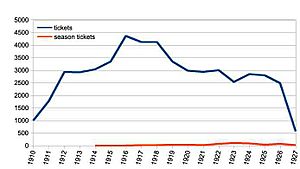 Passenger numbers rose rapidly until 1916, as shown in the table and graph below -

All content from Kiddle encyclopedia articles (including the article images and facts) can be freely used under Attribution-ShareAlike license, unless stated otherwise. Cite this article:
Taringamotu railway station Facts for Kids. Kiddle Encyclopedia.