Tedrow is an unincorporated community and census-designated place (CDP) in southwestern Dover Township, Fulton County, Ohio, United States. It lies at the intersection of the east-west County Road J with the north-south County Roads 17-2 and 17-3, 3 miles (5 km) north and 3.5 miles (5.6 km) west of the northern edge of the city of Wauseon, the county seat of Fulton County. The community lies less than one mile (about 1 km) north of the Ohio Turnpike, although the nearest exit is several miles away. 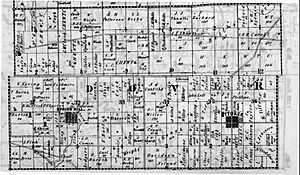 Brush Creek, a tributary of the Tiffin River, rises near Tedrow. The creek is fed by a spring. The spring's clean water made the spot a favorite Indian campground and resting place in their migratory hunting excursions. Thus, Tedrow was first known as "Spring Hill", as is show on a 1858 plat map.

A post office was established in 1839, and remained in operation until 1917. The community was named for the local Tedrow family.

All content from Kiddle encyclopedia articles (including the article images and facts) can be freely used under Attribution-ShareAlike license, unless stated otherwise. Cite this article:
Tedrow, Ohio Facts for Kids. Kiddle Encyclopedia.