Teen Wolf, known as The Cartoon Adventures of Teen Wolf in the United Kingdom, is an animated American television series broadcast from 1986 to 1987 that was produced by Southern Star Productions and Hanna-Barbera Australia in association with Clubhouse Pictures in the first season and Atlantic/Kushner-Locke in the second season. It was based on the 1985 live-action film, Teen Wolf.

The series is about a teenage boy and his family who can transform into werewolves, focusing on themes of coming of age and fitting in. While generally keeping true to the main ideas, this version made some changes from the film.

Scott Howard and his family now live in the fictional town of Wolverton, a small town constantly drawing tourists because of its history of werewolf sightings. (In the film the town was called 'Beacontown'.) Scott was an only child who lived with his father in the film, the cartoon gave him a little sister and grandparents.

Despite the youth audience, the cartoon series delivered very powerful critiques of disability as civil rights. Freely invoking an asthma attack or seizure, the series centered on how Scott felt "weird" immediately before and during his werewolf transformation.

Although he never hurt anybody while he was a werewolf, Scott was conscious of his difference from other teenagers and had to make accommodations for himself. He also expressed frustration that the residents of this town had stereotyped "his people".

A jock named Mick who now also attends Wolverton High constantly picks on Scott for being the "outsider". Mick attended a different high school in the film. Pamela is a cheerleader in the cartoon while in the film she really did not have much school spirit. 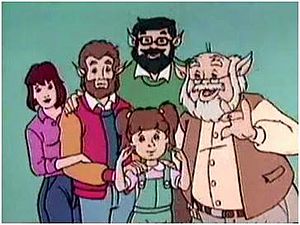 From left to right: Boof, Scott, Harold (above), Lupe (below) and Grandpa Howard.

Changes from the film

The town, named "Beacontown" in the film, is now called "Wolverton" in the series.

Scott's supernatural status, which was common knowledge to the public in the movie, is known only to his family, Stiles, and Boof in the series.

In the movie Scott is an only child who only lives with his dad Harold Howard. Scott's grandparents and a younger sister named Lupe, also live with them in the cartoon. Harold sported grey fur while transformed in the movie, however he is dark-furred in the series.

Mick, who attended a rival high school at age 21 (due to a short prison stay) in the movie, now attends Wolverton High with the other teens. The prison background and being several years older is removed.

Pam is a light-haired blond in the movie who is into drama. In the cartoon, she is a dark-haired blonde who is a cheerleader for Wolverton High.

There is a hangout for the teens called "Wolf Burgers" in the cartoon.

All content from Kiddle encyclopedia articles (including the article images and facts) can be freely used under Attribution-ShareAlike license, unless stated otherwise. Cite this article:
Teen Wolf (1986 TV series) Facts for Kids. Kiddle Encyclopedia.