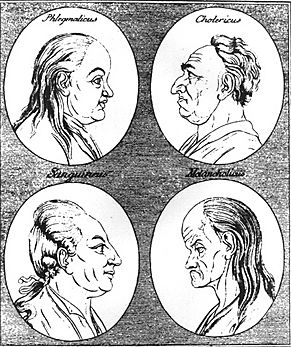 The four temperaments (from top left,clockwise): Phlegmatic, Choleric, Melancholic and Sanguinic. This is an 18th century illustration

Temperament is a term from psychology to describe the way in which an individual behaves. Examples for temperament are introversion and extroversion. Many psychologists believe that the traits called temperament are innate, and that they are not learned. Temperament also seems to be independent of the mood of the person or animal.

Galen of Pergamon was among the first people to describe different temperaments, or humors, as they were called at the time. Galen identified four types:

These correspond to the four classical elements fire, water, earth and air.

All content from Kiddle encyclopedia articles (including the article images and facts) can be freely used under Attribution-ShareAlike license, unless stated otherwise. Cite this article:
Temperament Facts for Kids. Kiddle Encyclopedia.