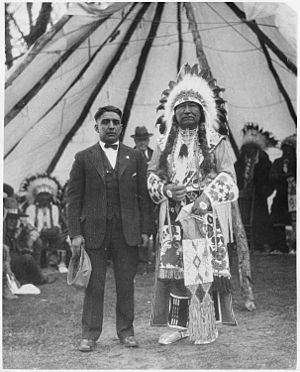 It is the nearest location to Lemhi Pass over the Bitterroot Range, where the Lewis and Clark Expedition first crossed the Continental Divide in 1805. Sacagawea, the Shoshoni woman who guided the Expedition, was born near Tendoy. Lemhi Pass is a National Historic Landmark.

The site of Fort Lemhi is 2 miles north of Tendoy.

All content from Kiddle encyclopedia articles (including the article images and facts) can be freely used under Attribution-ShareAlike license, unless stated otherwise. Cite this article:
Tendoy, Idaho Facts for Kids. Kiddle Encyclopedia.