The Tenterfield Terrier is a dog breed developed in Australia. They are a strong, active, hardy and agile dog, their smooth short coat making them 'easy care' family companions. 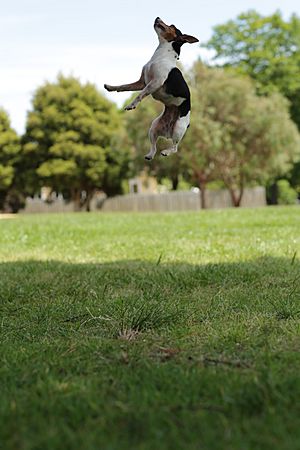 This is a photo of Rosie the Australian Champion Tenterfield Terrier. She can jump very high.

Tenterfield terriers must be predominantly white as required by he the Breed Standard of the ANKC. They are not exaggerated in any features. They have a square or compact body, a wedge shaped head with equal length from occiput to stop and stop to the end of the nose. This gives the head parallel head planes, making the head unusual in this Group. The Tenterfield Terrier may also have semi-erect ears or pricked ears, the latter being more common. Tenterfield Terriers stand around 28 cm (11 inches) high and can come in tan and white, black and white, liver/tan/white tri-coloured or black/tan/white tri-coloured. Their unique feature is their naturally occurring bob tail which can come in any length.

The forebears of the Tenterfield Terrier accompanied Australia's first European settlers who sailed from Portsmouth in the south of England. These dogs were vermin killers. The smallest of them were selected to play that role on ships, which is how they arrived in Australia. Large dogs would not have fared as well in the cramped shipboard environment where vermin found nooks and crannies. Small terriers had an advantage in that environment. Miniature individuals of the Fox Terrier breed suited the role, as their original breeding matched the new task closely.

By the late 19th century a dog type known as the Miniature Fox Terrier (known colloquially as "Mini Foxies") was well established in rural Australia as a vermin killer and family companion. By the 1920s the dog had become a fixture in urban households.

The name "Tenterfield" does not denote the terrier's exact place of origin. Rather, it may have derived from a well known breeder. The dog was bred extensively in and around northern New South Wales. Tenterfield is one of many localities in Australia in which small terriers of this type were kept. The town of Tenterfield is significant in Australian history for the Tenterfield Oration on independence from Britain. Additionally, the owner of the town's saddlery a man named George Woolnough, was immortalized by his grandson entertainer Peter Allen as the "Tenterfield Saddler". Tenterfield residents attest that Mr. Woolnough owned and loved a number of these terriers, though unfortunately no photographs of his dogs are known.

Accordingly, the name Tenterfield Terrier was suggested in the 1990s by television gardening personality Don Burke,.

The Tenterfield Terrier breed standard differs from that of the Miniature Fox Terrier, and although they are sometimes confused, the two breeds have been developing along divergent lines for some time and are now separate breeds.

Despite its small stature, the dog is friendly with an outgoing, adaptable nature, bold in the way of terriers and is intelligent. The coat is low maintenance for grooming purposes. Although they can live to 20 years in good health, the average lifespan is from 12 to 14 years.

All content from Kiddle encyclopedia articles (including the article images and facts) can be freely used under Attribution-ShareAlike license, unless stated otherwise. Cite this article:
Tenterfield Terrier Facts for Kids. Kiddle Encyclopedia.