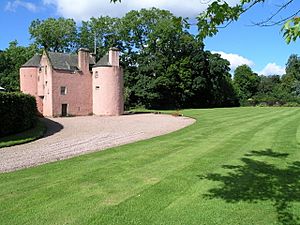 Terpersie Castle (originally built as Dalpersie House) is a 16th-century tower house in Tullynessle, Aberdeenshire, Scotland, located 5 kilometres (3.1 mi) north-west of Alford. It is protected as a category A listed building.

The small Z-plan manor tower house was constructed in 1561 by the Gordon family. In 1665 it was restored after burning down. After 1885 it was abandoned, and stood in ruins during most of the 20th century. In the 1980s the castle was restored as a residence by architects William Cowie Partnership.

Terpersie is one of the earliest known Z-plan manor -houses, defined as a rectangular main block with towers at opposite corners. The main block of Terpersie measures around 8.5 by 5.5 metres (28 by 18 ft), with two round towers of 5.2 metres (17 ft) diameter.

On the 16 May 1645, a Sunday, Major Baillie on campaign against Montrose, burnt the house and plundered and destroyed the surrounding area before the arrival of Lord Balcarres.

The Gordon who was its owner in 1745 is said to have been the last person executed for participating in the Jacobite Rebellion, and a recess in the upper part of the roof is said to be where he was captured.

All content from Kiddle encyclopedia articles (including the article images and facts) can be freely used under Attribution-ShareAlike license, unless stated otherwise. Cite this article:
Terpersie Castle Facts for Kids. Kiddle Encyclopedia.