An example of terrestrial locomotion. A horse galloping: an animation by photos of Eadweard Muybridge 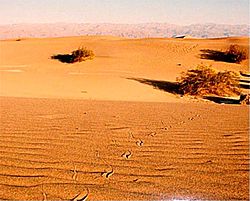 No legs! Tracks of a sidewinder snake in Death Valley, California

Terrestrial locomotion has evolved as animals adapted from aquatic to terrestrial places. Movement on land makes different problems than that on water, with less friction instead being the effects of gravity.

There are three basic forms of movement found among land animals:

Movement on legs is the most common form of land movement. It is the simple form of movement of two big groups with many members, the vertebrates and the arthropods. 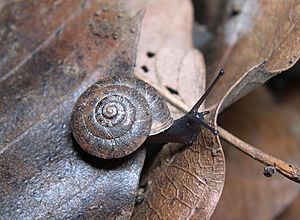 A snail moves by slithering.

There are a number of land and amphibious limbless vertebrates and invertebrates. These animals, due to lack of legs, use their bodies to move. These movements are sometimes called to as "slithering" or "crawling". 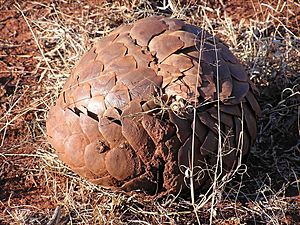 Although animals have never have wheels for locomotion, some animals will move by rolling their whole body.

The fastest terrestrial animal is the cheetah, which can get speeds of about 104 km/h (64 mph).

All content from Kiddle encyclopedia articles (including the article images and facts) can be freely used under Attribution-ShareAlike license, unless stated otherwise. Cite this article:
Terrestrial locomotion Facts for Kids. Kiddle Encyclopedia.