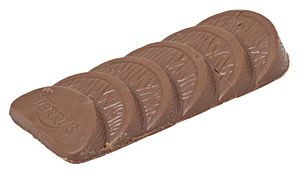 The Terry's Chocolate Orange comprises an orange-shaped ball of chocolate mixed with orange oil, divided into 20 segments, similar to a real orange, and wrapped in orange-skin patterned foil. When packaged, the segments are stuck together firmly in the centre; therefore, prior to unwrapping, the ball is traditionally tapped severely on a hard surface to cause the segments to separate from each other (dubbed "Tap and Unwrap" or "Whack and Unwrap").

There have been a number of spin-off products, currently including:

The Chocolate Orange product is known for its unusual marketing, which is usually at its heaviest around Christmas. At one time it was estimated that the Chocolate Orange was found in a tenth of British Christmas stockings. Actress Dawn French has fronted numerous campaigns for the brand, often in a posed scene of defending and hiding "her" Chocolate Orange from others. Famous marketing phrases include:

More recent advertisements (after the rebranding) do not feature French and contain the new slogan "Round but not round for long" (some include the Countdown timer music). The newest advertising campaign in the United Kingdom features various situations in which people are trying to break the segments of their Terry's Chocolate Orange apart with the slogan "Smash it to pieces, love it to bits".

A new advert in 2020, featuring voiceover by Brian Blessed, explains how the Chocolate Orange is a catalyst for "British Unsquaredness", along with a new slogan, "Deliciously Unsquare". 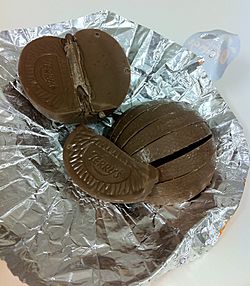 Changes to product weight in 2016

On 29 May 2016, the UK product size was reduced from 175g to 157g by changing the moulded shape of each segment to leave an air gap between each piece. Despite this, the price doubled in some retail outlets. This, along with changes to products such as Toblerone chocolate, is cited as an example of Shrinkflation in Britain following economic uncertainty around Brexit.

All content from Kiddle encyclopedia articles (including the article images and facts) can be freely used under Attribution-ShareAlike license, unless stated otherwise. Cite this article:
Terry's Chocolate Orange Facts for Kids. Kiddle Encyclopedia.