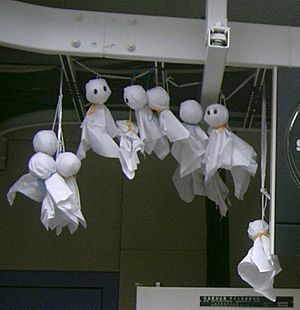 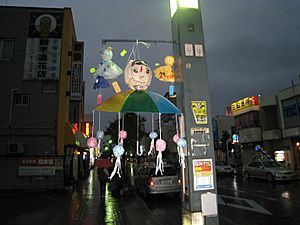 A teru teru bōzu (Japanese: てるてる坊主 or 照る照る坊主, literally "shine shine monk") is a small traditional handmade doll made of white paper or cloth that Japanese farmers began hanging outside of their window by a string. In shape and construction they are essentially identical to ghost dolls, such as those made at Halloween. This talisman is supposed to have magical powers to bring good weather and to stop or prevent a rainy day. Teru is a Japanese verb which describes sunshine, and a bōzu is a Buddhist monk (compare the word bonze), or in modern slang, "bald-headed"; bōzu is also used as a term of endearment for addressing little boys.

Teru teru bōzu became popular during the Edo period among urban dwellers, whose children would make them the day before the good weather was desired and chant, "Fine-weather priest, please let the weather be good tomorrow."

Traditionally, if the weather does turn out well, a libation of holy sake is poured over them, and they are washed away in the river. Today, children make teru teru bōzu out of tissue paper or cotton and string and hang them from a window when they wish for sunny weather, often before a school picnic day. Hanging it upside-down acts as a prayer for rain. They are a very common superstition in Japan.

There is a famous warabe uta associated with teru teru bōzu, written by Kyoson Asahara and composed by Shinpei Nakayama, that was released in 1921.

All content from Kiddle encyclopedia articles (including the article images and facts) can be freely used under Attribution-ShareAlike license, unless stated otherwise. Cite this article:
Teru teru bōzu Facts for Kids. Kiddle Encyclopedia.