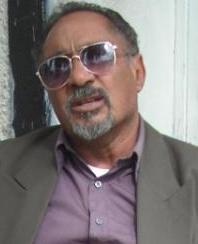 Tesfaye Gessesse (September 27, 1937 – December 16, 2020) was an Ethiopian actor and theatre director. He was born in Addis Ababa. He became the General Director of Hager Fikir Theatre in 1974. In 1975, he was removed and sent to prison by the Derg government after his play "Iqaw" which criticized as state terrorism.

All content from Kiddle encyclopedia articles (including the article images and facts) can be freely used under Attribution-ShareAlike license, unless stated otherwise. Cite this article:
Tesfaye Gessesse Facts for Kids. Kiddle Encyclopedia.