Testalinden is a historic area, school, creek, and a dam south of the Okanagan town of Oliver, British Columbia. 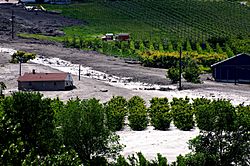 A vineyard near Oliver, BC after the June, 2010 mudslide

The dam at Testalinden Lake located on Mt. Kobau burst June 13, 2010 at approximately 2:15 creating a debris torrent landslide that descended about 2 kilometres to the valley below destroying at least 5 homes and farms. The dam was built in the 1930s and was in poor maintenance at the time. After a heavy rainfall the dam wasn't able to hold up the lake above and gave way. The debris blocked British Columbia Highway 97 and the creek created a new channel spilling over the highway. BC Highway 97 was cleared with the challenge of removing a home that slid onto the highway. Testalinden Creek was later rehabilitated by returning it to its former channel, which was heavily armoured with rock.

All content from Kiddle encyclopedia articles (including the article images and facts) can be freely used under Attribution-ShareAlike license, unless stated otherwise. Cite this article:
Testalinden Creek Facts for Kids. Kiddle Encyclopedia.