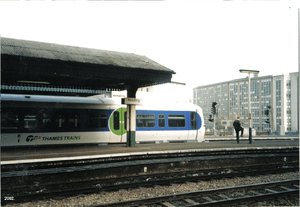 A Thames Turbo at Reading station in the year 2002. 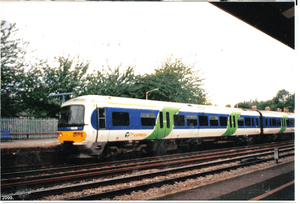 A Thames Turbo Express Oxford station in the year 2000.

Thames Trains was a British train operator under franchise running a mixture of short and long distance trains around the Thames Valley. Its services were centered around Reading and ran in the area surrounded by Oxford, Gatwick Airport, Guildford, London, Basingstoke, Worcester, Hereford and Stratford-upon-Avon. It was started when British Rail was privatised and Network SouthEast was broken up. In 2004 it was replaced by First Great Western Link, which was merged with First Great Western and Wessex Trains after 2 years, forming a "Greater Western" franchise.

Thames Trains ran one of the Trains involved in the Ladbroke Grove Rail Crash in 1999, three years after it was started.

All content from Kiddle encyclopedia articles (including the article images and facts) can be freely used under Attribution-ShareAlike license, unless stated otherwise. Cite this article:
Thames Trains Facts for Kids. Kiddle Encyclopedia.