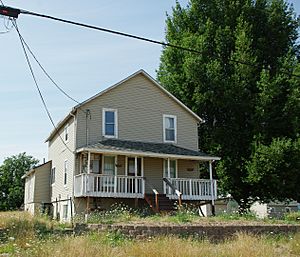 A house at Thatcher along Kansas City Road

Thatcher is an unincorporated historic community in Washington County, Oregon, United States. It was located approximately three miles north of Forest Grove at the intersection of Hillside and Thatcher roads. The area is part of the Forest Grove Rural Fire Protection District.

The community was named after pioneers Harmon and Jemima Thatcher, who came from Indiana soon after their marriage in 1847, first settling in Yamhill County, and later taking up a Donation Land Claim in the area that now bears their name.

A Thatcher post office was established in 1895 and closed in 1902, with the introduction of rural free delivery. According to author Ralph Friedman, as of 1990, nothing remained at the site to indicate a settlement was there

All content from Kiddle encyclopedia articles (including the article images and facts) can be freely used under Attribution-ShareAlike license, unless stated otherwise. Cite this article:
Thatcher, Oregon Facts for Kids. Kiddle Encyclopedia.