The Ballpark facts for kids

The Ballpark is a baseball stadium located in the town of Old Orchard Beach, Maine. The stadium has a seating capacity of 6,000 and is a former Triple-A baseball facility that was almost destroyed by years of neglect until a community organized volunteer effort revived the stadium.

The Ballpark opened in 1984. It was built primarily for baseball and was the home field of the Triple-A International League's Maine Guides from 1984–87 and the Maine Phillies in 1988.

The Guides were the top minor league affiliate for the Cleveland Indians from 1984–1986 and the Philadelphia Phillies from 1987–1988. The owners of the team believed that, due to the large amount of vacation traffic that the town enjoys in the summer months, numerous vacationers would attend games. However, after only five years in existence, the Maine franchise relocated to Moosic, Pennsylvania, following the 1988 season.

Although attendance was not a major problem during the franchise's existence, the park was hampered by three main driving forces: First, in the summer the stadium was home to a large population of Maine Black Flies that pestered fans. Second, there was only one road leading to and from the stadium, thus creating a traffic nightmare. Finally, soon after the stadium was built, other existing Triple-A stadiums were expanded and many new ones were built, making it normal for most Triple-A stadiums to hold well over 10,000 people, far above the 6,000 that the newly-constructed Ball Park held, so that very shortly after its construction it was essentially obsolete.

Stadium owner Jordan Kobritz fell behind on debt payments to The Finance Authority of Maine which had lent him the funds to construct the ballpark in 1984. In July 1987, Kobritz agreed to relinquish the deed to the ballpark to The Old Orchard Beach Town Council in exchange for his being release from his financial obligations.

After the Guides left, the stadium was leased to a group called, Seashore Performing Arts Center (SEAPAC), who hosted many concerts in the late 80s and early 90s. The concerts ceased after local residents complained about the loud noise late at night.

By the 2000s, the Ballpark was shuttered and the facility had suffered from years of neglect. The grass turned into brush and overgrowth, and the walls of the facility started to fall down.

In 2005, Old Orchard Beach considered selling the 50-acre (200,000 m2) site that held the ballpark, as well as the 25-acre (100,000 m2) site that included Old Orchard Beach High School's athletic fields. Then Town Manager Jim Thomas speculated at the time that the site could be sold for $2.5 million and generate $1 million per-year in property taxes.

To make matters worse, a major fire caused by a lightning strike damaged the facility on June 21, 2007.

In June 2008, the town placed a referendum question on the local election ballot proposing to sell the stadium and create room for a condominium complex. However, much to the relief of many of the 10,000 citizens of the town, the question was voted down by a considerable majority. 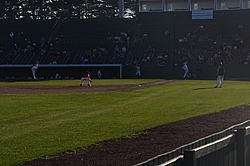 The Ballpark during a 2012 Old Orchard Beach Raging Tide game.

Around April 2008, a local volunteer organization known as The Ball Park Group took on the task of cleaning up the 53-acre (210,000 m2) property and renovating the facility to a condition suitable for hosting games and special events. The volunteers removed the debris from the skybox fire, cleared vegetative overgrowth, rebuilt the dugouts and outfield wall, leveled off the playing field and planted new sod. Much of the skilled work was completed with the volunteer help of local plumbers, contractors, carpenters and electricians and most of the funding has come from private donations.

In October 2009, the website ballparkdigest.com officially removed The Ballpark in Old Orchard Beach from its "Endangered Ballparks List."

On October 31, 2009, the stadium took a major step in resuming active baseball play. Two teams made up of local high school players from all over Southern Maine played the first game at the stadium in nearly 20 years.

In May 2010, the United States Collegiate Athletic Association Baseball National Tournament was held at The Ballpark, and the tournament announced that it would hold its 2011 Tournament there as well. The Can-Am League's Brockton Rox also played a pair of exhibition games at the Ballpark against the Quebec Capitales on May 22 and 23.

On July 2, 2010, the Ballpark hosted its first New England Collegiate Baseball League game when the Sanford Mainers and the Lowell All-Americans played before a crowd of 550 fans. Many felt that an NECBL team, rather than a minor league baseball team, would be the best fit for the ballpark as nearby Portland is home to the Portland Sea Dogs, the Boston Red Sox Double A affiliate. This desire for a full-time team came to fruition in 2011 when the All-Americans moved to Old Orchard Beach and made their debut as the Old Orchard Beach Raging Tide.

On June 3, 2015, the Old Orchard Beach Surge played their first home game and beat the Watertown Bucks 13-3 before a crowd of about 500. The team relocated to Saranac Lake, New York for the 2019 season.

All content from Kiddle encyclopedia articles (including the article images and facts) can be freely used under Attribution-ShareAlike license, unless stated otherwise. Cite this article:
The Ballpark Facts for Kids. Kiddle Encyclopedia.