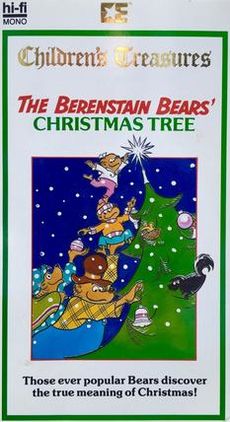 It is Christmas Eve in Bear Country and the Bear Family is decorating for Christmas. Now the only thing they need is the tree. Mama suggests Papa and the cubs to get a tree from Grizzly Gus' lot, but she reminds them to return home as soon as they can since a snowstorm is likely. Papa, however, decides to go out into the mountains to find the right tree for them. The first tree they find is in good shape, but unfortunately, it is home to a skunk, some squirrels, a grouse, a chipmunk, and twenty-six crows, who chase them off. But, from their point of view, Christmas is a time for them to celebrate as well, and without their home, how will they do so?

Papa and the cubs find another tree on a cliff. But it is the home to an eagle, a hawk, a wolf, and a snowy owl who aren't too pleased that Papa wants to chop their tree down either. After narrowly avoiding the eagle's attack, the bears continue on through the mountains, despite the fact that it is now snowing heavily.

After climbing their way through the snow-covered mountains, Papa and the cubs find a third perfect-looking tree. This time, however, Papa takes a good look at the tree and sees a little window on the trunk. Inside, there is a family of snowbirds decorating a small twig like a Christmas tree. Touched by this, Papa decides not to chop the birds' tree down and tells Brother and Sister that Christmas is the time to be thinking of family and friends. They then go back down the mountain to the tree lot, only to find that they are completely sold out (with a small sign below reading "Happy New Year!") They are all very sad until they find that their tree house has been decorated by all the animals they met on their way in an act of gratitude, Mama and Papa Bear lead everyone in a Christmas carol about the Christmas star and its meaning. 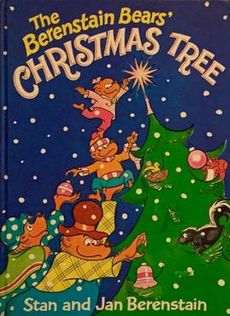 The plot of the storybook, published by Random House in 1980, closely follows the storyline of the television special. The Random House edition remained in print for nearly three decades until a newer storybook version was released by Zondervan in 2009. As part of the Berenstain Bears Living Lights Series, this new edition generally follows the original plot, but focuses more closely on the Christian aspect of the holiday, including depictions of a manger scene and several Bible verses in the updated text.

All content from Kiddle encyclopedia articles (including the article images and facts) can be freely used under Attribution-ShareAlike license, unless stated otherwise. Cite this article:
The Berenstain Bears' Christmas Tree Facts for Kids. Kiddle Encyclopedia.