The program premiered on NBC on Thursday, November 20, 1980 at 8:30PM ET. Its lead-in was Daffy Duck's Thanks-for-Giving Special and it competed against The Waltons on CBS and NFL football on ABC. The special was sponsored by Kellogg's. 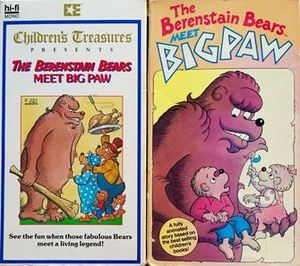 VHS editions of Bigpaw. The special was originally released by Embassy Home Entertainment (1987) and then by Kids Klassics (1989). The special has also been made available on LaserDisc and DVD.

Thanksgiving is approaching in Bear Country. The Bear Family attempt to discern their fortunes by reading the harvest honeycomb when an ominous footprint appears in the bottom of the pan. Mama interprets this as a sign that the Thanksgiving Legend of Bigpaw is coming to pass. According to this legend, Mama states and warns the cubs that if the bears were selfish, greedy and unkind to the needy and do not share in the bounties of nature, Bigpaw will come and gobble up Bear Country county by county. Papa believes the story to be nonsense.

Papa considers himself a bear "for all seasons", telling the cubs how he takes care of the Earth and all of its creatures year round - and especially on days like Easter, Christmas, and Arbor Day. But when it comes to Thanksgiving, Papa seems to care more about eating a feast than giving thanks.

While visiting a pumpkin patch, Papa learns that his selfishness debt that the legend of the terrifying Bigpaw is real and is on the move through Sinister Bog. On their own, Brother and Sister decide to go and gather (no ifs, ands, or buts) mixed nuts for Papa. They set off into the woods and into Sinister Bog.

Gathering nuts in a tree, Brother and Sister feel the earth trembling as Bigpaw approaches ("Bigpaw"). Terrified, the cubs lose their balance, and begin to fall from the tree. They are saved from injury, though, by landing in the enormous hand of Bigpaw. Instead of hurting them, Bigpaw gently places them safely upon the ground and the cubs immediately realize that Bigpaw is not a creature to fear.

Meanwhile, back at the village square, Papa has gathered members of Bear Country, rallying a group of citizens to seek out Bigpaw and "get him before he gets us". Mama thinks the bears are getting carried away and convinces them to use their heads and think things through ("A Stranger's Just Somebody (You Don't Already Know)").

Bigpaw has climbed a high mountain to take a nap and his yawn echoes through the valley. But the fearful bears interpret his yawn as a terrifying roar and Papa - seeing Bigpaw's giant shadow - assembles a mob. Brother and Sister try to tell Papa of Bigpaw's kindness, but he doesn't listen.

Up on the mountain, Bigpaw was setting in for his nap when he heard the sound of the angry mob approaching. Afraid of the approaching bears, Bigpaw built a tall stack of boulders to use as weapons against the approaching mob until Sister and Brother intervene, placing themselves between Bigpaw and the angry members of Bear Country. Bigpaw holds back his tower of rock, gently picks up Brother and SIster, who explain how kind the giant is.

Everyone celebrates and the Bear Family invites Bigpaw to Thanksgiving dinner the following day, at which time Bigpaw presents Papa with his favorite treat - mixed nuts ("Thankfulness - Reprise"). 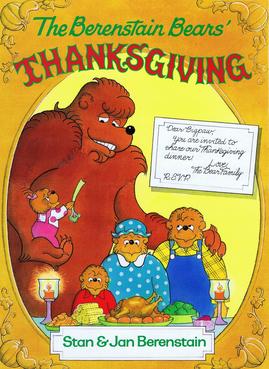 A storybook version of the film was published by Scholastic in 1997 under the title The Berenstain Bears' Thanksgiving. The book closely follows the plot of the television special. As of August 2016, the book is out of print but can be easily found on the secondhand market.

The Berenstain Bear Scouts Meet Bigpaw (1995) has a similar plot.

All content from Kiddle encyclopedia articles (including the article images and facts) can be freely used under Attribution-ShareAlike license, unless stated otherwise. Cite this article:
The Berenstain Bears Meet Bigpaw Facts for Kids. Kiddle Encyclopedia.