The Building Centre facts for kids 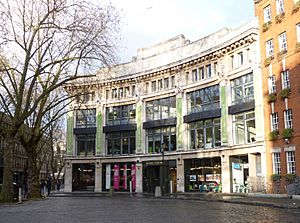 The Building Centre is a building in central London used to promote innovation in the built environment. It is run by the Built Environment Trust, a charitable body.

The Building Centre operated from New Bond Street until its building was destroyed during The Blitz on 12 May 1941. As a result, it moved to Conduit Street and was based there until 1951, when it moved to its present home in Store Street. The building had been designed by the modernist architects Tapersall and Haase as a Daimler motor showroom. It is built of reinforced concrete, faced with Portland stone. When converted to the Building Centre, a sgraffito mural by Augustus Lunn was installed in the open-air courtyard and patio, although this has since been hidden or lost.

Organisations at the Building Centre

Admission to the galleries on the ground floor and lower ground floor is free. The Centre's café is operated by The Gentlemen Baristas, which is open to the public. There are conference facilities available for hire and are used for a variety of events.

All content from Kiddle encyclopedia articles (including the article images and facts) can be freely used under Attribution-ShareAlike license, unless stated otherwise. Cite this article:
The Building Centre Facts for Kids. Kiddle Encyclopedia.