The Carleton facts for kids 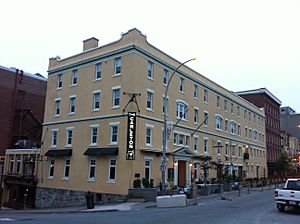 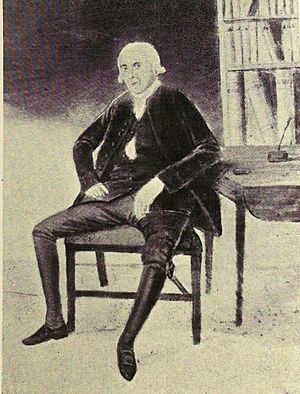 Bulkeley built his new home on Argyle Street on the land of Captain James Bannerman, who died during Father Le Loutre's War in the Attack at Jeddore. He also had installed the black marble mantel from the Governor's house in the King's Bastion at Louisbourg. He is also reported to have brought the stone from the ruins of Louisbourg (1758) to build the house. At his new home in the 1780s, Bulkeley regularly entertained the future King William IV (abolished slavery in British Empire; had an affair with Governor Wentworth's wife Francis) as well as Prince Edward (father of Queen Victoria). He also held large levees there on New Year’s Day and the queen’s birthday, as well as dinners on St Patrick’s and St George’s days."

He named his home Carleton House after Guy Carleton, 1st Baron Dorchester upon his visit to Halifax in 1786 and becoming governor general for the whole of British North America. (Carleton ordered the creation of the Book of Negroes and oversaw the evacuation of escaped slaves (i.e., Black Loyalists) from New York to Nova Scotia.)

All content from Kiddle encyclopedia articles (including the article images and facts) can be freely used under Attribution-ShareAlike license, unless stated otherwise. Cite this article:
The Carleton Facts for Kids. Kiddle Encyclopedia.