The Citadel (mall) facts for kids

The Citadel Mall is one of the two enclosed shopping malls of Colorado Springs.

Construction on the Citadel Mall began in 1970, and it opened on March 1, 1972, anchored by a J.C. Penney and Denver Dry Goods store, and included a two screen movie theater. The original mall consisted of 2 levels and 594,800 square feet of leasable space.

By 1980 The Rouse Company owned the mall. In 1984 the mall was expanded westward with a two level extension which included a third anchor store, May-Daniels & Fisher aka May D&F, and the creation of a two level food court. The mall's last expansion occurred in 1995 with the opening of a three level Dillard's at the end of the western extension.

In 1997 it was sold to The Macerich Company, a company based in California. In January 2007, the mall was sold to Midwest Mall Properties, a private investor group, which retained Macerich as management company.

Although many stores surround the actual mall, the entire campus is located at the intersection of Platte and Academy. When the mall originally opened it was on the eastern edge of the city. 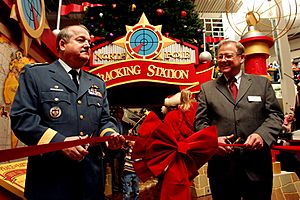 From November 18 thru December 25, 2005, for the 50th anniversary of the NORAD Tracks Santa program, the Citadel Mall had a massive Santa Tracking Village that included a 25-foot tree, a tracking map and viewfinder where visitors could watch a NORAD Tracks Santa video, hear audio messages of peace from children around the world, and receive a 24-page coloring book with Santa's assistants wearing NORAD patches.

All content from Kiddle encyclopedia articles (including the article images and facts) can be freely used under Attribution-ShareAlike license, unless stated otherwise. Cite this article:
The Citadel (mall) Facts for Kids. Kiddle Encyclopedia.