The Compleat Housewife facts for kids

The Compleat Housewife, or, Accomplish'd Gentlewoman's Companion is a cookery book written by Eliza Smith and first published in London in 1727. It became extremely popular, running through 18 editions in fifty years.

It was the first cookery book to be published in the Thirteen Colonies of America: it was printed in Williamsburg, Virginia, in 1742. It contained the first published recipe for "katchup", and appears to be the earliest source for bread and butter pudding.

The book includes recipes not only for foods but for wines, cordial-waters, medicines and salves.

The title page describes The Compleat Housewife as a

collection of several hundred of the most approved receipts, in cookery, pastry, confectionery, preserving, pickles, cakes, creams, jellies, made wines, cordials. And also bills of fare for every month of the year. To which is added, a collection of nearly two hundred family receipts of medicines; viz. drinks, syrups, salves, ointments, and many other things of sovereign and approved efficacy in most distempers, pains, aches, wounds, sores, etc. never before made publick in these parts; fit either for private families, or such publick-spirited gentlewomen as would be beneficent to their poor neighbours.

The book was the first to publish a recipe for "Katchup"; it included mushrooms, anchovies and horseradish. The title The Compleat Housewife may owe something to Gervase Markham's 1615 The English Huswife.

Little is known of Smith beyond what she writes of herself in the preface. She spent her life working as a cook or housekeeper in wealthy households, and unlike Elizabeth Raffald who left service to run her own shop, continued in that profession despite the success of her book. It is possible that she worked at Beaulieu Abbey, Hampshire. She is critical of cookery books written by men who conceal their secrets, preventing readers from using their recipes successfully.

The preface contains the following passage:

It being grown as fashionable for a book now to appear in public without a preface, as for a lady to appear at a ball without a hoop-petticoat, I shall conform to the custom for fashion-sake and not through any necessity. The subject being both common and universal, needs no argument to introduce it, and being so necessary for the gratification of the appetite, stands in need of no encomiums to allure persons to the practice of it; since there are but a few nowadays who love not good eating and drinking

The passage was lightly adapted from an earlier book with a similar title, John Nott's The Cooks and Confectioners Dictionary: or, the Accomplish’d Housewife’s Companion (1723), which declared he had added an introduction because fashion had made it as odd for a book to be printed without one as for a man to be seen "in church without a neck cloth or a lady without a hoop-petticoat."

Smith offers no general advice, either at the start of the book or at the start of chapters; each chapter consists entirely of recipes. There are no lists of ingredients, these simply being mentioned as needed in the recipes. Most recipes do not mention either oven temperature or cooking time, though for example "To candy Orange Flowers" instructs "set your glasses in a stove with a moderate heat", and "To Stew a Rump of Beef" states "this requires six or seven hours stewing."

The recipes are predominantly English, but dishes include French and other foreign names, and imported ingredients such as spices.

Recipes are described tersely, and do not generally spell out basic techniques such as how to make pastry; the recipe for "A Battalia Pye" does not mention pastry at all, though it is called for with the instruction to "close the pye":

A Battalia Pye
Take four small chickens, four squab pigeons, four sucking rabbets; cut them in pieces, season them with savoury spice, and lay 'em in the pye, with four sweetbreads sliced, and as many sheep's tongues, two shiver'd palates, two pair of lamb-stones, twenty or thirty coxcombs, with savoury balls and oysters. Lay on butter, and close the pye. A Lear.

However, a few frequently-used components of dishes are described, such as "A Lear for Savoury Pyes" and "A Ragoo for made Dishes". The "Lear" is a thickened sauce made with claret, gravy, "oyster liquor", anchovies, herbs, onion and butter. The "Ragoo" contains similar ingredients, with the addition of sliced meats and mushrooms; the recipe ends with "use it when called for", such as in the Battalia Pye. 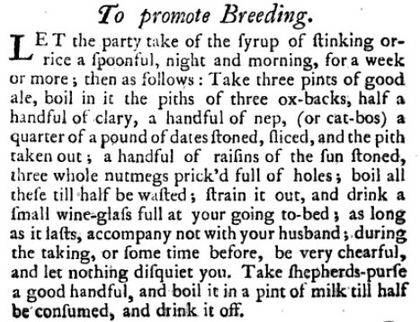 Recipes are provided for home-made medicines and remedies such as "To promote Breeding" for women wanting to become pregnant. The recipe calls for a spoonful of "stinking orrice" syrup to be taken night and morning, and for "good ale" to be boiled with "the piths of 3 ox-backs, half a handful of clary, a handful of nep (or cat-bos)", dates, raisins, and nutmegs. The woman drinking this mixture "at your going to-bed" is enjoined "as long as it lasts, accompany not with your husband."

The book was first published in 1727 and ran through 18 editions by 1773. The first four editions were published under the byline "E— S—", but Smith did reveal she was a woman "constantly employed in fashionable and noble Families ... for the Space of thirty Years and upwards". The fifth edition of 1732 gave the author's name as "E. Smith".

The bibliographer William Carew Hazlitt recorded that the 7th edition included "near fifty Receipts being communicated just before the author's death".

The Compleat Housewife was the first cookery book to be published in America, when William Parks, an ambitious and enterprising printer (originally from Shropshire) printed it in Williamsburg, Virginia in 1742. His version of The Compleat Housewife, a "cookery book of ambitious scope", was based on the fifth London edition of 1732, altered to suit American taste, and without recipes "the ingredients or materials for which are not to be had in this country." Copies of the 1742 edition have become very rare, but "happily, one copy has returned to the city of its origin", and is in the Library of Colonial Williamsburg, Incorporated.

All content from Kiddle encyclopedia articles (including the article images and facts) can be freely used under Attribution-ShareAlike license, unless stated otherwise. Cite this article:
The Compleat Housewife Facts for Kids. Kiddle Encyclopedia.