The Cornhill, Ipswich facts for kids

The Cornhill in Ipswich is a historic town square in the centre of Ipswich, Suffolk. The square has been a gathering place for many centuries in the town, the earliest recorded event was the execution of the Ipswich Martyrs in the 16th century. In the present-day, the Cornhill hosts various events such as Christmas markets, live music shows, and outdoor screenings of notable broadcasts, such as the proms. The square is surrounded by grand Victorian buildings built as the town's wealth was booming from sheep wool and dock trade. The prominent Ipswich Town Hall building is located on the Cornhill. 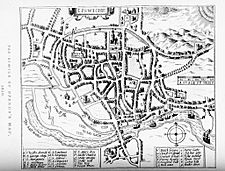 The Cornhill can be seen on Ipswich's earliest map. John Speed's 1610 map labeled the square as number 8 and is referred to as "Corne hill"

The Cornhill has always been an important area throughout the town's history. One of the earliest recorded events taken place on the Cornhill was the execution of the Ipswich Martyrs, nine people were persecuted for their Lollard or Protestant beliefs around 1515-1558. A memorial for the martyrs was erected in Christchurch Park in 1903. The monument has a square, stone base that bears a testament to the martyrs on the front, and lists their names on the other three sides.

In 1980's the Cornhill was pedestrianised into a town square after being used as a busy road throughout the town for decades.

Cabman's Shelter, created in 1892, was made to provide a dry, warm space for drivers of horse-drawn cabs in the centre of Ipswich. It was moved from the Cornhill, to Christchurch Park in 1895. Damaged by fire in 1995, it was restored in 2006.

All content from Kiddle encyclopedia articles (including the article images and facts) can be freely used under Attribution-ShareAlike license, unless stated otherwise. Cite this article:
The Cornhill, Ipswich Facts for Kids. Kiddle Encyclopedia.