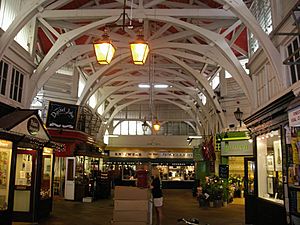 Inside the Covered Market. 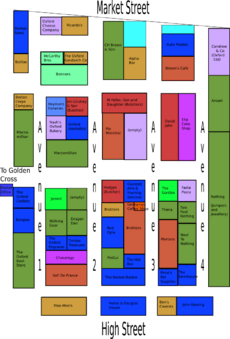 Map of the Covered Market.

The Covered Market is a historic market with permanent stalls and shops in a large covered structure in central Oxford, England. 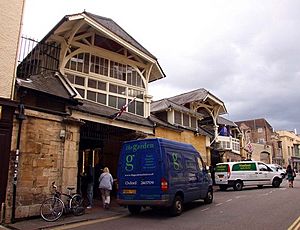 Northern entrance to the Covered Market.

The Covered Market was officially opened on 1 November 1774 and is still active today. It was started in response to a general wish to clear 'untidy, messy and unsavoury stalls' from the main streets of central Oxford.

John Gwynn, the architect of Magdalen Bridge, drew up the plans and designed the High Street front with its four entrances. In 1772, the newly formed Market committee, half of whose members came from the town and half from the university, accepted an estimate of nine hundred and sixteen pounds ten shillings, for the building of twenty butchers' shops.

Twenty more soon followed, and after 1773 meat was allowed to be sold only inside the market. From this nucleus the market grew, with stalls for garden produce, pig meat, dairy products and fish. 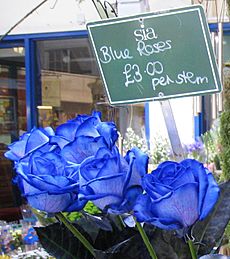 Some of the stalls sell rather unusual items

Today the covered market is still home to numerous traders, around half of which are food retailers, including traditional market shops selling fresh food such as greengrocers and butchers (including some who produce the distinctive, local Oxford sausage). There are also newer gift shops, bakeries and sandwich shops. Most of the shops now are quite a bit larger than the original stall sizes, and so the number of businesses in the covered market is smaller than in the past. It is a bustling area, especially on Saturdays.

The Covered Market may be accessed via the four entrances on the High Street, via Golden Cross (from Cornmarket), and from three entrances on Market Street.

In 2012/2013 Oxford City Council embarked on a process of rent increases. Much protested against by the market traders, these rises have in some cases been in excess of 50%.

The closure of Palm's Delicatessen and Chocology has been linked to these increases. The Palm's Delicatessen unit was empty for two years, then occupied by an outlet of national greetings cards chain Cards Galore. This has caused concern amongst traders, as it is in direct violation of the Market's policy of leasing to independent traders.

All content from Kiddle encyclopedia articles (including the article images and facts) can be freely used under Attribution-ShareAlike license, unless stated otherwise. Cite this article:
Covered Market, Oxford Facts for Kids. Kiddle Encyclopedia.