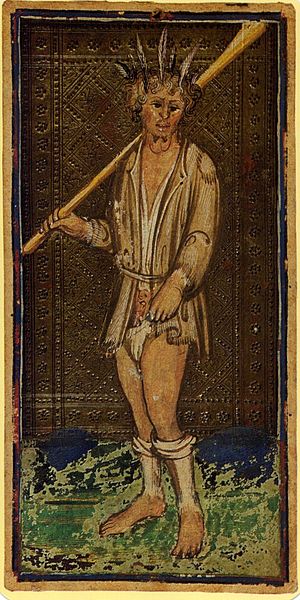 In the Visconti-Sforza tarot deck, the Fool is depicted as a ragged vagabond.

The Fool or The Jester ("Il Matto" in Italian) is one of the 78 cards in a Tarot deck. It is one of the 22 Trump cards that make up the Major Arcana and the only one of the major arcana found in the modern playing cards in the role of the joker. The Fool is often numbered 0. It is used in divination as well as in game playing.

All content from Kiddle encyclopedia articles (including the article images and facts) can be freely used under Attribution-ShareAlike license, unless stated otherwise. Cite this article:
The Fool (Tarot card) Facts for Kids. Kiddle Encyclopedia.