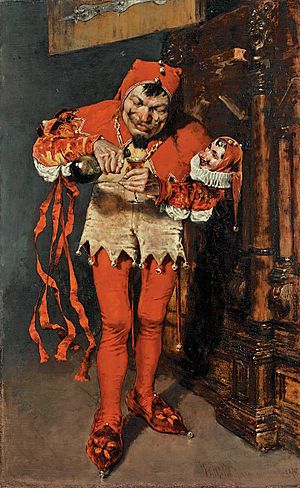 Painting of a jester

A jester, court jester, or fool, was historically an entertainer during the medieval and Renaissance eras who was a member of the household of a nobleman or a monarch employed to entertain him and his guests. A jester was also an itinerant performer who entertained common folk at fairs and markets. Jesters are also modern-day entertainers who resemble their historical counterparts.

Jesters in medieval times are often thought to have worn brightly coloured clothes and eccentric hats in various patterns and their modern counterparts usually mimic this costume. Jesters entertained with a wide variety of skills: principal among them were song, music, and storytelling, but many also used acrobatics, juggling, telling jokes, and magic tricks. Much of the entertainment was performed in a comic style and many jesters made jokes in word or song about people or events well known to their audiences. 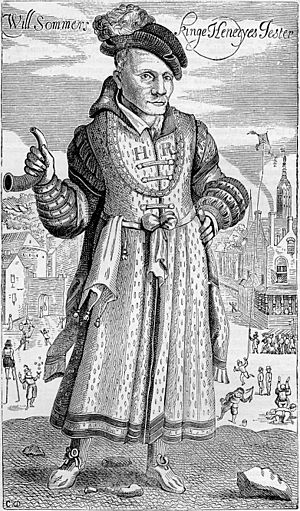 Early jesters were popular in Ancient Egypt, and entertained Egyptian pharaohs. The ancient Romans had a tradition of professional jesters, called balatros. Balatrones were paid for their jests, and the tables of the wealthy were generally open to them for the sake of the amusement they afforded. Jesters were popular with the Aztec people in the 14th to 16th centuries.

Many royal courts throughout English royal history employed entertainers and most had professional fools, sometimes called licensed fools. Entertainment included music, storytelling, and physical comedy. It has also been suggested they performed acrobatics and juggling.

In the 18th century, jesters out except in Russia, Spain and Germany. In France and Italy, travelling groups of jesters performed plays featuring characters in a form of theatre called the commedia dell'arte. A version of this passed into British folk tradition in the form of a puppet show, Punch and Judy. In France the tradition of the court jester ended with the French Revolution.

Today, the jester is portrayed in different formats of medieval reenactment and entertainment, including film, stage performance, and carnival.

All content from Kiddle encyclopedia articles (including the article images and facts) can be freely used under Attribution-ShareAlike license, unless stated otherwise. Cite this article:
Jester Facts for Kids. Kiddle Encyclopedia.